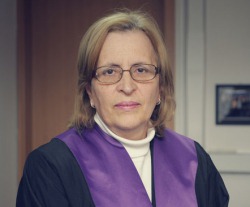 OTHER ENGAGEMENTS IN THE JUDICIAL AND PROSECUTORAL SYSTEM
March 2010 March 2011 member of the Kosovo Judicial Council,
March 2010 September 2010, member of the Independent Judicial and Prosecutorial Commission (CPHC), during the Second and Third Phase of the process of appointment and reappointment of judges and prosecutors of Kosovo,
February 2011 member of the Kosovo Prosecutorial Council,
May 2011 to February 2012 chairwoman of panels for the evaluation and interviewing of candidates for prosecutor at the level of regional and municipal prosecutor's offices in Kosovo (second appointment process due to failure to fill positions during the first process).
October - November 2012, Chair of the Panels for the Evaluation and Interview of Candidates for Prosecutor in the Prosecution Offices of the Regions and Municipalities of Kosovo,
Trainer of the Kosovo Judicial Institute: Trainer Certified by the American Institute of Judicial Skills (NITA), trainer in the field of European Union Law in Practice, trainer for the European Convention on Fundamental Rights and Freedoms.
Participates in many conferences, seminars and various workshops, as well as participates in numerous trainings, at home and abroad, including study visits to various countries around the world.

Knowledge of Serbian and English.

The Office of Chief State Prosecutor