Chairman Hyseni presented the one-year work of the KPC

Chairman Hyseni on this occasion said: “The Council has held 16 meetings this year, and has issued about 215 decisions which have served to fulfill its legal mandate and serve the prosecutorial system. Furthermore, the Council has also held numerous other meetings through its standing committees, ad hoc and other bodies.

Let me mention some of the key successes and tasks accomplished by the Council, based on its constitutional and legal mandate: For the purpose of functionalization and implementation of competences and basic legislation, KPC during 2019 has drafted and adopted the following by-laws:

The Council has adopted the War Crimes Strategy and has established the mechanisms foreseen for the implementation of this strategy such as: the task force and the monitoring group comprised of representatives of the Kosovo Prosecutorial Council, State Prosecutor, Kosovo Police and the Ministry of Justice. It is worth noting that this document is national in nature and has enabled the war crimes department to prioritize cases of this nature.

These entire sub-legal framework and these Strategies have been developed by the capacities of the prosecutorial system and in cooperation and with the support of our international partners.

These acts and strategies have contributed to increasing efficiency and improving the quality of work by advancing the public communication system, disciplinary procedures against prosecutors, and procedures for appointing chief prosecutors, mediation procedures for criminal cases, and case management and allocation.

During 2019, the Council completed the recruitment process of 12 new prosecutors who in May 2019 have begun one-year initial training at the Academy of Justice. With this process, the Council has increased the number of prosecutors to 197, which will be the highest number of prosecutors we have ever had, namely 9 prosecutors per 100,000 inhabitants, an average of the same for European countries. It is worth noting that this process has been transparent, meritorious and has been monitored by civil society, OSCE and representatives of the British Project “Strengthening the Judicial System in Kosovo”.

The process of drafting the regulation has always been in full co-operation with our permanent international partners and civil society. The regulation was adopted only after a public hearing was organized. This regulation has advanced the selection process and as a result of several months of work the Council appointed the Chief Prosecutor of the Special Prosecution Office of the Republic of Kosovo and the Chief Prosecutor of the Basic Prosecution Office in Pristina on 23 December 2019 to begin work in January 2020.

During 2019, the Council, with the aim of dealing with serious criminal cases and at the request of the relevant prosecution offices, advanced 5 state prosecutors from the General Department to the Serious Crimes Department and the Juvenile Department on the Basic Prosecutions offices.

One of the objectives of the Council for this year has been the accountability, professionalism and discipline of prosecutors. Therefore, during 2019, KPC has conducted disciplinary procedures through the Disciplinary Commission and investigative panels and imposed these disciplinary measures against prosecutors which have taken final form as follows:

In addition, the KPC has taken four other disciplinary decisions but is expected to be final after the appeal deadline expires. These decisions are as follows:

Also, 4 other cases are still under investigation by the respective investigative panels.

The Committee has completed the evaluation of 10 other permanent prosecutors for whom only Council approval is expected. The committee is currently evaluating the performance of the other 20 prosecutors with an initial mandate.

All processes of recruitment transfer and promotion, performance evaluation, disciplining of prosecutors, drafting of bylaws, budgeting, and administration of prosecutions have been carried out through permanent and ad hoc committees of the Kosovo Prosecutorial Council.

KPC with the purpose of implementing the Strategic Plan of the Prosecutorial System 2019-2021, to prioritize and reduce the number of cases for corruption and economic crime cases, has established the Working Group for Supervision of the Work of the Kosovo Prosecutor's Offices and Unit on combating corruption and economic crimes at the Basic Prosecution in Pristina, for the category of these criminal offenses.

As a result of these measures, the prosecutorial system has managed that during the nine-month period of this year, out of 279 cases of corruption received with 725 persons has solved 263 cases with 483 persons, respectively, resolved 94% of cases received. Priority during this year were also treated PPN criminal reports in cases of corruption where as a result during January-September 2019, out of 314 PPN Information received with 601 persons, Kosovo Prosecution Offices handled and completed 310 PPN Information by 539 persons or 98.7 % of cases received.

Whereas in terms of economic crimes, out of 343 cases received with 480 persons, 357 cases were resolved with 474 persons, respectively 4% more cases were solved than received.

So, current reports indicate efficiency in dealing with cases of corruption and economic crimes.

As one of the most important projects for the Prosecutorial Council is the ICT / CMIS Project which is co-financed with the Norwegian Government.

The total number of staff trained in the use of CMIS is 395 (prosecutors and support staff). We already have full use of staff in all prosecutions.

The total number of cases registered in the electronic system from January to November 2019 is as follows:

CMIS has also been developed for the second instance (Appellate Prosecution) and is expected to start implementation in January 2020.

Regarding other aspects of Information Technology, the Kosovo Prosecutorial Council is committed to creating a work environment that will enable the availability of online digital services offered not only to the prosecutorial system, but also to the citizens of Kosovo. In this regard:

So far, Kosovo Prosecutorial Council has executed 98% of the total budget, for all economic categories and budget programs of the Council for expenditures created by December of this year.

During 2019, the Internal Audit Unit performed planned audits according to the annual plan. These include compliance audits which mainly cover the following areas: budget processes, expenditures, revenues, cash, asset management, asset and maintenance records, procurement system and other procedures. According to the annual plan, a total of five audits were planned and all were implemented, expressed as a percentage of 100% of the plan implemented. During 2019 these units were audited:

All findings and recommendations were well addressed and discussed with the unit leaders in advance. In the process, by the end of the year there is a follow up of the implementation of the recommendations given in the audit reports for the aforementioned units.

It is noteworthy that the KPC assisted the Kosovo Prosecutors Office with human resources and that during 2019 the Secretariat recruited 69 officials throughout the prosecution system, and 123 interns at all levels of the prosecution. The transfer of staff transferred from the former Office of Disciplinary Counsel was also carried out.

In addition, during 2019 the Council has devoted constant attention to providing and improving physical and communication infrastructure in the prosecutorial system, in order to provide optimal conditions for the work of prosecutors and support staff. In this regard, among others, the following activities have been carried out:

The Prosecution Performance Review Unit during 2019 carried out the following activities:

The Council has continued the policy of open and professional cooperation with all local and international institutions.

An important part of the cooperation has also been expressed in the European integration processes; since all the capacities of the Council have responded at all times to reporting requirements and various project proposals for project financing have been prepared.

KPC has continued to advance the implementation of the communication strategy where through the Regulation on Public Communication, the practice of drafting a 24-hour report on the development of prosecutorial activity has begun. Through this report, the public is informed about the actions of the prosecution offices for 24 hours in criminal cases such as detentions by decision of the prosecutor, detention, seizures and searches, indictments, with particular emphasis on those related to corruption and organized crime.

During 2019 we had increased transparency and facilitation of obtaining information on the fact that each prosecution office now has its own public information officers.

Also, in order to unify the information in the prosecutorial system, a web portal of this system has been designed and finalized, which will bring innovations in providing information to the citizens and facilitating their access.

Furthermore, Council meetings have continued to be open to the media and the public and we have provided information of public interest.

However, despite the research findings that there is an increase in transparency, communication and perception of the prosecutorial system, the Kosovo Prosecutorial Council will not stop working to ensure that the communication, transparency, accountability, perception and reliability of this system achieve the merit it deserves by public opinion.

The Council, in cooperation with the Office of the Chief State Prosecutor, has also been able to coordinate and support the capacity building of prosecutors and staff during 2019. In cooperation with the Academy of Justice and other local and international partners different training programs have been organized, at home and abroad, based on the needs of the prosecutorial system.

In addition to our achievements for 2019, we had different challenges. I would like to emphasize that the main challenges with which we are faced are as follows:

We as a Council have dealt with these challenges seriously, sending numerous and well-reasoned budget requests to the Ministry of Finance, the Government and the Assembly.

As a result, the draft law on the 2020 a more promising budget limit has been set, which, if approved, would affect the improvement of prosecutorial system services.

I would like to inform you that the Council is finalizing the Annual Work Plan for 2020, which includes the activities foreseen by the legal mandate, the Strategic Plan of the prosecutorial system 2019 - 2021 and the requirements deriving from the European integration process.

KPC is also in the process of drafting a Strategy for the Priority Treatment of Corruption and Economic Crime 2020-2021 and the Strategic Plan for the Special Prosecution Office of the Republic of Kosovo.

Furthermore, in reflection of the legal changes that have taken place during 2018 and 2019, the Council will continue to work on the drafting and adoption of relevant bylaws provided for by these amendments.

During the year 2020, 8 new prosecutors are expected to be recruited to meet the needs of the prosecutorial system as a result of the number of cases at work and to fill the positions of prosecutors who have retired and will retire. Also, at the beginning of 2020, the KPC will develop the procedures necessary to supplement the SPRK with the number of prosecutors as needed.

Moreover, in 2020 the procedures for the election of some new members of the Prosecutorial Council are expected to be developed, as the mandate of this Council composition expires in December 2020.

In conclusion, I would like to inform you that in accordance with the law, the Council will publish the Work Report for 2019 at the beginning of 2020 and make it available on the Council's official website and in hard copy, whereby the public and You, Distinguished media representatives, you will be informed in detail about our activities during the year we are leaving behind.

On this occasion, I thank you as respected media representatives for the cooperation we had this year and wish you all the end of the year holidays, once again expressing my high readiness of the Council and of the prosecutorial system in general to further enhance our cooperation in the future.

Congratulations and success to you in 2020!

Also, on behalf of the prosecutorial system, all the citizens of the Republic of Kosovo convey the best wishes for the end of the year holidays.

Thanks and goodbye to other festive times! ” 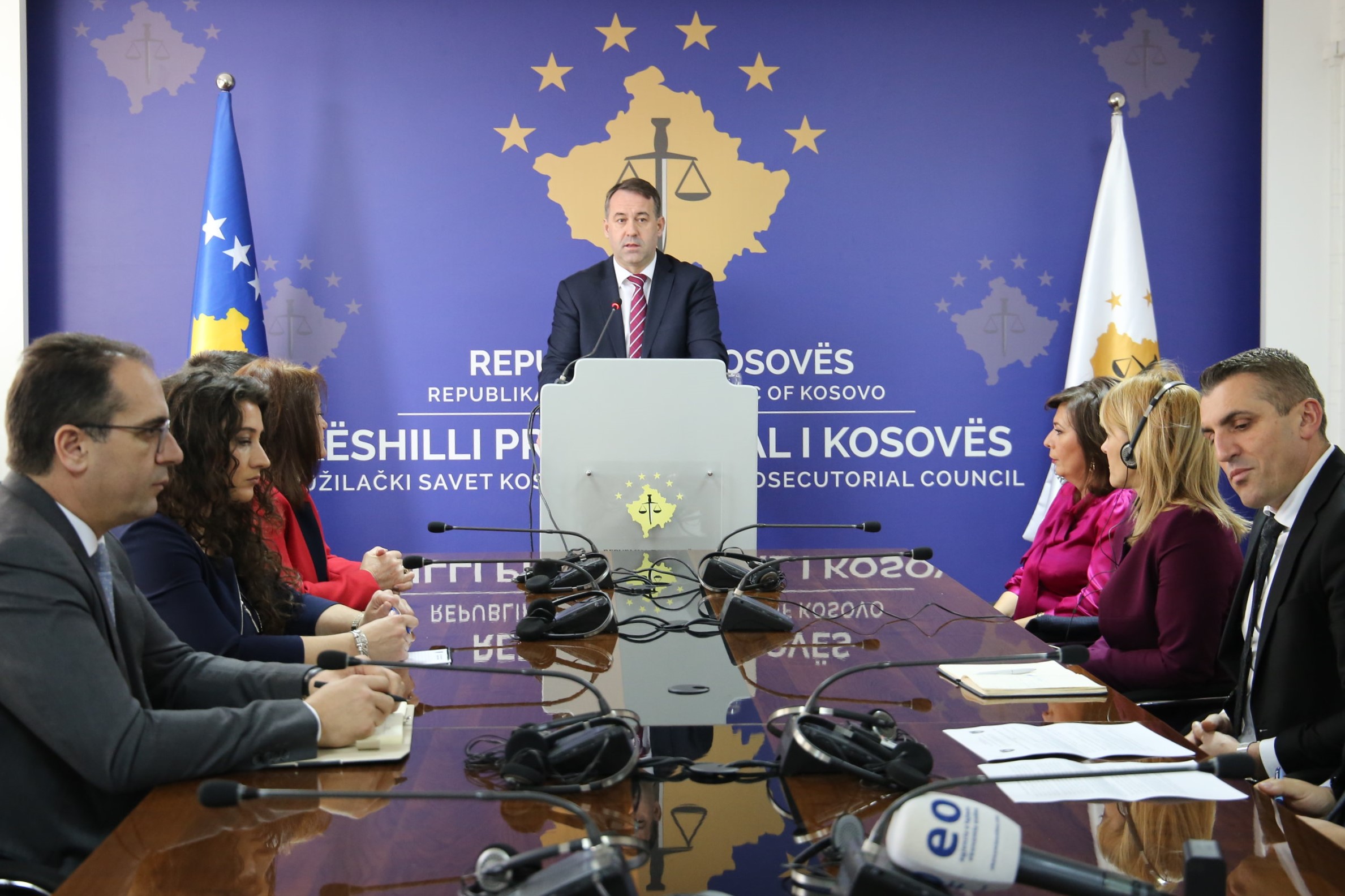